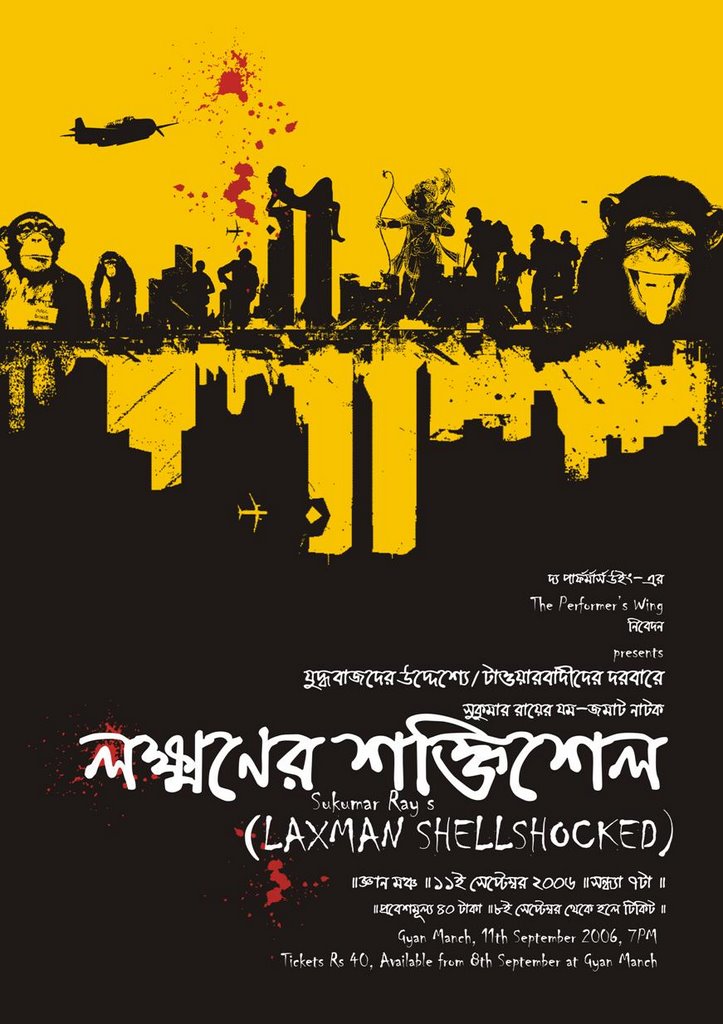 Do come and watch, not because by doing so you’d be sponsoring our cast party [I wish] but because it really promises to be fun.
And if that isn’t incentive enough, you can come and watch me in all my facial-haired glory. :-[ 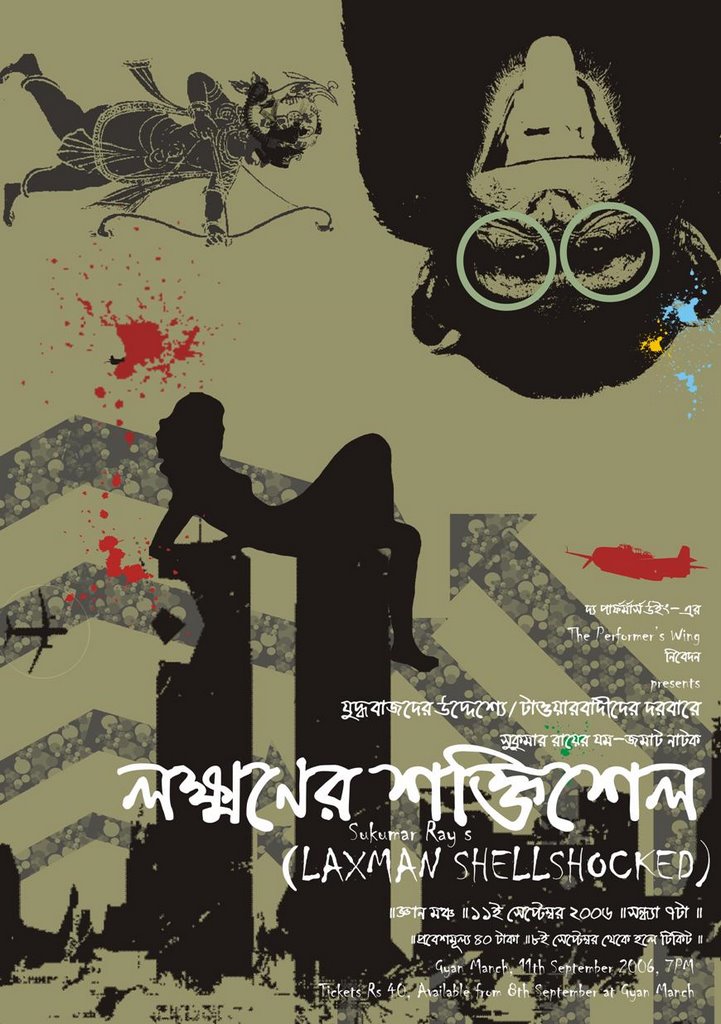 Don't let the timings bother you, by the way. It's quite a short play.

Ok, ok, I've had it with people offering me fake money and others chasing me down the department corridor begging for a new post.
So, while I was being "stalked" at the club by Utey's boyfriend [entirely her claim, mind, entirely hers. Me, if I could notice an eligible bachelor when I saw one .. well, I don't know what I would've done, really], who should chance to drop by, but my alleged future husband. This particular personage's hand had been offered to me in marriage a few months ago, but having drowned myself already in the love of an individual at last count being hunted down by hot mexican women and hunting down hotter spanish waitresses, I had politely declined. At this point, it would be pertinent, I suppose, to bring to your notice, that my sentences are interminably long.
Moving on, said personage is a former national-level tennis player, very shy, very sweet and very hirsute. I don't yet know whether he was aware that higher powers had contemplated tying my pallu to his dhoti [isn't that how you get married?] at a blessed time in the future. He is known to my mashi, my mother's aunt, an intrepid matchmaker if there ever was one. So there he was, hovering about the shamiana, sweating profusely. And then [this is going to be in bangla. Dee, go away, I'm not translating :-p ] :-

Alleged Future Husband : Hello, Aunty, how are you?
Mashi: O ma! _________ jey! Hello hello!! [she uses his full name, even though she obviously knows him well, just so I can understand this is the famous AFH]
*wink 1 to me*
AFH and Mashi engage in some small talk. AFH also addresses my brat of a young cousin, showing what looked like very genuine interest in her sporting progress. He even offers to teach her to improve her backhand.
My mother gazes, amazed.
My mother (notice how she dominates most of my posts): Aei, are you married?
AFH is decidedly befuddled. Smiles shyly.
Mashi: Koi, na to! His mother has been searching for a suitable bride for so long! *wink 2 to mother. wink 3 to me*
My mother (eyes lit up, ready with bait): MEET MY DAUGHTER, NAME ROHINI, AGE 23!!
Mashi: *wink 4 to anyone who will care to look*
AFH (in a state of shock): Oh, achha! I mean ...
Me (meaning to be angry, but breaking into chuckles at AFH's facial expression. He really is cute): Hullo. Don't mind my mother, she's doing her Pujo shopping.
Mashi: *wink 5 to me*
AFH (whimpering, like he's in an alternate reality soaked in evil): Oh. Achha.
Mother (a trifle impatient): You have a girlfriend, at least?
AFH (these are words he has finally understood): Eh heh heh .. ki jey bolen, aunty!
Mashi: Aare, girlfriends?! I have seen women falling over him at the tennis club! But our _______, does he care?! No no! Very good boy, our _____. [the exercise of proprietory rights over eligible AFH has begun].
AFH (blushing) : I think I have to leave now.
Mother: Where do you have to go? No no, no going, you sit and chat with us!
AFH: No, aunty, I'm very sorry, but I'm here to organise a golfing event my company is sponsoring. I'll come another time, ok?
Mother: Oho! You're working! *dazzling smile* Good pay?
Mashi: Everyday he buys a new car!
[Have I mentioned she's been winking incontrollably all this while?]
AFH (realising he's fighting a losing battle, smiles in defeat): Aunty, please! Ebar thhamun apni!

Anyway, this is just the gist. In the meantime, my mother has obtained from him the name of his company, his designation, the number of clubs he is a member of, the number of matches he has played, and undoubtedly, when I wasn't looking, the number of his bank account.
Uhm, incidentally, the way I've falsely dramatised the conversation, it would appear he was desperate to leave. Truth be told, he wasn't, he seemed pleased in fact, when I told him how my friends had been a huge fan (used the word "heartthrob" for the first time in my life. It was fun to see him wince) of his when we were pimply teenagers in school. I've never seen a person, male or female, blush so deeply and so frequently in such a short span of time. Then again, he was being extremely polite, beaming benevolently at one and all, and not showing any sort of interest in me. Aah well.
The important thing is, and now I have to leave to do my bratty cousin's homework for her, the important thing is, the moment he left, my mother demanded of my aunt why this masterpiece of God had not been made available to me. When she pleaded innocent and said he had been rudely dismissed as a marital prospective, my mother raised such a hue and cry that, June Maliah, who was sitting at the next table with a bunch of kids, turned around and looked at her questioningly. Decisions were made to get in touch with the boy's parents that very evening, based solely on the fact that they were very rich. And no, this was getting to be serious, because my tech-illiterate aunt was actually fiddling with her cellphone to retrieve AFH's home number.
It was no good explaining that I was not interested in marriage (uhm, don't let this discourage you. You may continue your search for a suitable boy for me, or even present your own glorious self), there was absolutely no way she was listening to the fact that I was still in love with ... uhm ... who I was in love with.
So ... and I'm really late now - I need to present, in december, an IIT graduated green card holder, obviously doing something in the software sector, earning hundreds of thousands of dollars, and tall. Because, I have declared undying, and ardently reciprocated, love for said fictitious individual - a man of sparkling wit, and doubtless reliability. Believe it or not, my mother and my mashi are so pleased with my valuable, if inordinately lucky, find, that I have actually been offered money to get a boob job done, before aforementioned non-existent individual makes his false presence felt in Kolkata. In December. I have time till then to be free of further harassments and threats on the pre-marital front.
Hmm. I'm keeping my fingers crossed that they will forget all about this with time.

And this takes the cake. Or bakes it :-

Shahana, a pretty junior [please keep in mind that every single JUDE junior is completely off her head. Bonkers, to put it mildly] takes time off from some intense romancing to spot me, trots up, pokes prods and squeezes my arm as if to test the authenticity of her new toy, and ultimately declares with unparalleled glee: Tumi kiii moidaa !!

[Yes, yes. The blog is dying. Either pay me a million so I can spill the beans on my hot romance with the President of the Togolese Republic or just shut up and read whatever crap I can come up with on a hungover Sunday morning].
Posted by rainbeau_peep at 9:20 AM 15 comments:

Call me bitter and prophesy for me a loveless future of grey hair and 17 cats, but I don't get certain couples. You know, lovers.
There's the sort that will go out together, coochie-coo on couches and dance the hubba-hubba with a red rose 'tween their teeth, but they will also have separate lives. Separate friends, whom they will concede to meet. Alone. That's the sort I'm rooting for.
I can just see you invoking the Curse of the Catfur on the red velvet sofa I shall be purchasing in a burst of orgasmic passion and optimism when I'm 25, only to realise that, hello? wherefore the passyon? whozza gonna do da jiggy-wiggy wid me? Yo, Nobody. [Stopit. I don't do the ... uhm ... vagina monologue.. to put it subtly]. And then I shall spend my lonesome nights brushing illusory fur off my raggedy lilac sweater and nursing my gout and my grief.
It's this other sort - the joined at the hips, the ones who can't breathe a blooming second without each other, that I can't get. I have a friend, I've known her for 20 years now, we're all about the ya-ya sisterhood and these days she can't meet old friends without the boyfriend freaking tagging fucking along EVERY bleeding where. Uhm, ok, so, he's alright. Not bad at all, loves her and seems like a good person. I mean, I have nothing against him. But this is the girl who used to bite me in lower nursery when she was peeved. We had a warrior dance. We grew up together, we cried together [she did. me, i'm a clown. ahem.], we fell in love with the same boy [ok, yea, that was bad] and spent endless nights talking. Just talking. And now, I can't meet her unless her boyfriend is free. Anyway.
On a more festive note, please congratulate J and Kneo, who are at this moment wallowing in love over good wine and pepper devilled crabs at Mocambo, in celebration of their third anniversary. Those two, they're incredible. They've squabbled and fought their way through love like I've never seen before. I'd raise a toast to them, but the bastards didn't invite me.

In other news, my mother and my aunt have taken it upon themselves to get me a life. Much in the manner of Opal Mehta, I suspect. Topmost on their agenda is to drag me kicking and screaming to the Tolly Monsoon Bash, next Saturday. Turns out, men will think I'm really hot and oh-so-cool, if I'm seen at a place of debauchery and forbidden fruit with aged family members.
I need company - anybody I know going?

As I had always known, applying mehndi on the hands of an unmarried woman proves lucky for her marital prospects. I have been proposed marriage by 3 individuals on the same day. So what if two were women? I am most pleased with the progress.
Posted by rainbeau_peep at 1:25 PM 21 comments:

And because I have painstakingly wasted precious Lord-Jim-reading time on painting this blog in different hues of prettiness and must oblige it with some text [however irrelevant to all our lives] in celebration of the sidebar's miraculous dhei-dhei naach to it's rightful place from the depths of oblivion wherein it hath resided these many sunsets, to the right side of this exuberant piece of literature, I shall tell you of the things that excite the Peep's edgy nerves these days. To make matters relatively easier, I shall shorten my sentences. And tabulate.